Skulls – An Introduction: What Do You See? 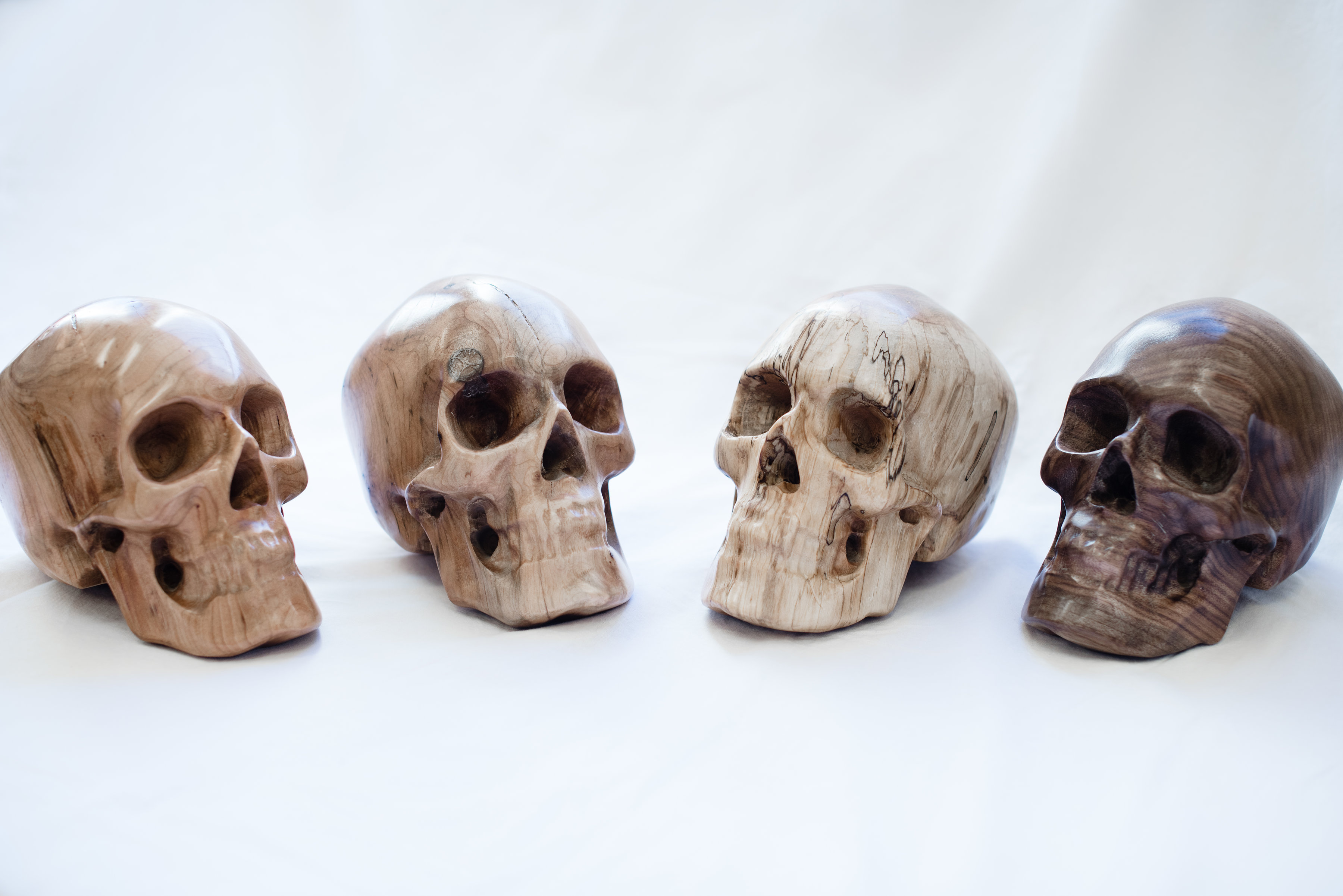 It’s interesting to discover how one man’s production of carved wooden skulls connects to history, mythology, anthropology, psychology, and even physiology…

There’s a small part of the human brain that has a very specific responsibility: it recognizes faces. This ability is so strong that even the simple image of two dots followed by a small circle and curved line – :o) — is instantly recognized as representing a face. It has been suggested that because this primitive part of the brain does not distinguish between the image of a human skull and that of a human face, skulls have come to represent both death (the event) and the history the skull represents (the life of the deceased). This may go some way toward explaining both the attraction and the repulsion of skulls. We are afraid of or react negatively to the death they represent, but we are drawn to the memory of our loved ones who have passed on.

Another reason some of us are drawn to skulls may be that with its larger-than-eyes eye sockets, a skull generates a degree of neoteny – the tendency to be drawn to and feel protective of things that appear as young or babies. Think of Disney’s way of drawing all its sweet, tender, heroic animal characters (for example, Bambi) with extra-large eyes. Think, even, of how for thousands of years, people have applied cosmetics to their eyes in an effort to make them appear larger and thus more appealing. In today’s fashion magazines as well as on the walls of ancient Egyptian tombs, figures are shown with exaggerated, kohl-lined eyes.

Finally, a skull with its lower jaw attached, especially with most of its teeth in place, can be interpreted as grinning. For this reason, even though it may seem to some as macabre or fantastical, there have always been depictions of skulls (and skeletons) as humorous. There’s a famous black-and-white cartoon with dancing skeletons in rows (Disney Studio’s Silly Symphony “Dancing Skeletons” 1929); there’s a talking skull who “drinks” imaginary wine in Peter S. Beagle’s fantasy, The Last Unicorn; there are the many renditions of cheerful skulls and skeletons in happy celebrations of the Day of the Dead, in Mexico.

Clearly, for many reasons, skulls are objects of fascination and meaning, and have been for ages.

Richard Weigand is currently exploring skulls as symbols and subject. He explains that his production of wooden skulls arises from the convergence of a philosophic interest and an economic opportunity: samurai and a CNC.

It started with the economics-based decision to buy a Computer Numerical Control (CNC) machine in order to produce more of his signature chairs. Weigand explained, “A CNC is, basically, a computer-controlled router. You make an original item and then the machine can make copies of its pieces, drastically reducing the time involved in producing a series.”

Once the chairs were completed, Weigand considered what other project would make good use of the machine’s capabilities and fulfill his need to create in wood.

“I’ve always been interested in the Orient,” he said, “in the culture, spiritual and aesthetic expressions.

“The samurai are fascinating. They were warriors, dedicated to a master and totally loyal. Bushido is the code of the samurai, and in the Bushido the number one thing a samurai has to do is to confront a horrible death – daily.

“On the surface that sounds like something out of a kung fu movie, but the reality of that to them is that, if they confront a horrible death daily, only then can they lead a life of integrity. The general belief is that the worst consequence of most things could be death. If you are afraid of dying then you won’t take the risk, or stand up for what you believe, or take a daring chance in business or in life. That’s the point of it, that they must face what is scary to them and so overcome the fear.

“That philosophy made me think of symbolic representations of death, and that led to skulls, and here we are.”

Weigand’s line of 3D wooden skulls are beautiful, sleek (like his chairs). They make use of the figure, strength and carvability of native hardwoods. They are tactile and seductive. They are tied to history and culture and religion and dedication… and to good humor and the economics of having a tool and needing to use it. And they will be instantly recognized by everyone who sees them.