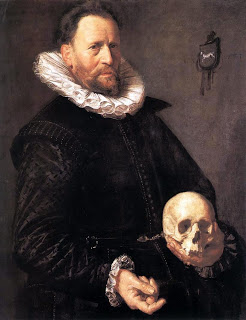 Did you know that a skull has one of the most recognized and beloved roles in Shakespeare’s plays?

In “the Scottish play” (theater folks know about the “curse” that is attached to Hamlet, and won’t say the title aloud), the hero, Prince Hamlet, is tossed a skull that has been freshly dug up from the cemetery. The Prince claims to recognize the fellow, and proceeds to have conversation with the thing.

With all its baggage as symbol and actual artifact, the skull is a tool much beloved by writers.

From Shakespeare’s time to the modern day, people have not lost their fascination with skulls and their symbolism. One of the stranger versions of this fascination is Les Diableries – a series of photographs taken in the 1860s. French publisher Adolph Block printed books of pictures taken of little scenes that were set up using miniature sculpted skeletons and small, grinning skulls in fancy dress clothing and in high-society poses and activities. The scenes were supposed to represent Hell and the corruption of the French court. Today they are rather bizarre testimony to our fascination with skulls and their symbolic meanings.

This fascination is certainly still strong. In modern fiction, The Last Unicorn is one of the most popular titles in the fantasy genre. Written by Peter S. Beagle and published in 1968, the story features a talking skull; this skull is not alive but is not really dead, either. He has the answer to how the heroes can escape their prison, but all the skull wants is to remember life and talk about pleasures of the flesh he no longer has!

The power of skulls to embody and express some of life’s most important questions has not been lost on modern screenwriters, either, starting with 1933’s King Kong, in which the monster that is supposed to represent humankind’s most basic, animal-like instincts (as opposed to modern man’s achievements in, for example, building the Empire State Building) arose from “Skull Island.”

The images continue through the Indiana Jones movies. Each of the four films features a skull or skulls in at least one scene. Who can forget the sight of a snake pouring through the eye socket of a skull in Raiders of the Lost Ark, or the garland of skulls worn by the evil priest in Temple of Doom? Even 2007’s superhero Ghost Rider appears as a flaming skull when he is acting as the Devil’s bounty hunter, symbol of both death and super-charged life.

While it’s clear that skulls in literature have the power to startle and entertain us, closer scrutiny of the thing may be even more worthwhile. This may be especially so if the skull is not an actual artifact, but is, instead, art. Richard is exploring the philosophical, inspirational, and reflectional possibilities of skulls in his line of 3D wooden skulls. Fashioned of native hardwoods, smoothed to sensuous curves, and  polished to a warm and subtle gleam, these handcrafted wooden skulls do exactly what art should do: provoke thought, pose questions, offer inspiration, encourage a connection between the physical and  intellectual realms.

From page to picture to hand, skulls tell the tale.