Skulls: Funerary Objects Around the World 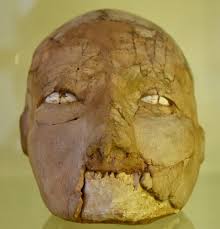 There’s a certain accessory that sometimes holds a place of focus in the homes of trendy young fashionistas: skulls. Skulls realistic, skulls stylized, wood skulls, 3D wooden skulls, skulls decorated and skulls plain, and although it sounds a trifle gruesome to some, to others, they are beautiful or at least, thought-provoking.

And although we may think this is something “this younger generation” has come up with, the truth is, human skulls have decorated homes since we first started building homes.

Scientists studying our earliest history use 195,000 years ago as the time when “modern” mankind made himself known. About 95,000 years after that, people began producing (or at least, leaving behind examples of) art. The earliest known use of the human skull in art occurred at around 7000 BC in the ancient city of Jericho, located in what is now called Palestine.

In ancient Jericho, bodies were buried beneath homes. When a family member died, survivors detached the head from the body, removed flesh from bone, and covered the bare skull with plaster. Shells were placed in the eye sockets. Then the skulls were painted to more closely resemble the deceased, and were displayed in the home.

In the New World, Zapotec and Mixteca people treated their dead in ways similar to the ways of the people of Jericho. From 600 – 1250 AD, entire racks of skulls were assembled in Meso-America by the Toltec, Maya, and Aztec peoples. Sometimes “skulls” were carved into sides of buildings or along roadways; sometimes actual skulls were lined up and positioned to cover entire walls. Anthropologists theorize that skulls not only represented some of the Aztec people’s god and goddesses and their powers and responsibilities, but that they also honored a deceased loved one. So, there were carvings of skull-faced gods as well as little skull beads that were worn in necklaces.

Ancient Buddhist practices included the use of a skull cap made from an actual skull. Ornately decorated, these caps and masks were worn by priests as reminders of our mortality. One Hindu god is depicted wearing a crown of skulls, each skull representing the death of a negative quality such as anger, desire, etc. Lord Shiva’s necklace of skulls show his dominance over death.

Christians, no less than their Aztec or Buddhist brethren, have made artistic use of skulls throughout their history. Until recently, the display and veneration of the bones of martyrs and saints was common, and often gave rise to theft or even war to gain ownership of these relics. Early Christian art includes many uses of skulls and whole skeletons, including ossuary chapels and tombs as well as paintings or sculptures. Ossuaries are communal depositories for skeletons; they could be very simple (like a well) but others were complex and stunning as art and symbols.

One of the most famous Christian ossuaries is the crypt beneath the church of Santa Maria della Conczione dei Cappuccini, in Rome. Here, in 1631, the bones of more than 3,700 monks were exhumed and arranged to form patterns and pictures that the Capuchin order intends to represent mankind’s mortality.

Since some Christians believe that where one spends eternity depends on how one behaves while on Earth, these ever-present, cautionary reminders of “coming attractions” could be considered a kindness!