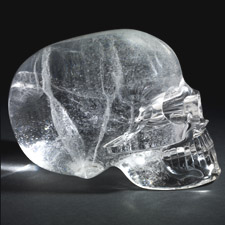 “Crystal skull” carved from a single block of quartz , acquired from Tiffany and Co., New York around 1897 by the British Museum, dating probably to the second half of the 19th century. Photograph at britishmuseum.org, Research News, Studying the Crystal Skull, Margaret Sax et.al. 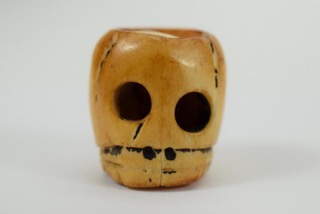 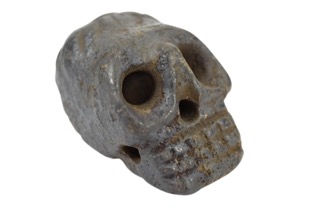 Carved skull bead attributed to Pre-Columbian Maya (300-800 AD), size approximately 1 inch x 1 inch x 1 inch. Photograph posted by auctionzip.com, March 2019
“Crystal” skulls have been traded and collected and had tales told about them since the mid-1800’s. Then and ever since, carved skulls have been offered for sale by collectors who claim they were made by the ancient peoples of MesoAmerica – Aztec, Toltecs, and Maya.

The “first generation” of these skulls, with records dating to about 1860, may be genuine pre-Columbian artifacts; the authenticated examples are small, are made of stone, and each one has a hole drilled through it, presumably for stringing it into a necklace. Most scientists believe that they were mementoes of the dead, a purpose that is strikingly similar to that of the skulls used in modern Dia de los Muertos celebrations which have their roots as much in pagan beliefs as in Christian, or that they were icons of gods representing regeneration.

By the beginning of the 1900s, copies of these artifacts had begun to appear. These have almost all been carved within the last 100 years, using modern techniques and tools and materials sourced from locations other than Central America.

However, these knock-offs, together with their genuine cousins, have generated a entire body of legends and stories. One of the most popular and enduing is about the mystical, magical Twelve Crystal Skulls.

There are twelve “crystal” skulls, scattered in collections around the world, that are claimed to be extraordinary. These skulls vary in size but are somewhat larger than commonly collected skulls; a few are the size of actual human skulls. Most (but not all) of these skulls have been examined and studied, and most scientists agree that they were manufactured around the turn of the 20th century, using techniques and tools of that era.

The fourth Indiana Jones movie, Indiana Jones and the Kingdom of the Crystal Skull, released in 2008, builds on a modern, New Age, urban legend mish-mash of information, memes, and tropes. Most of these legends claim that the twelve skulls were carved either by ancient shamen or by alien visitors, who poured into them the wisdom of the ages. Then the skulls were either scattered and hidden all over the world or they were put together in a secret and sacred place, and they are now awaiting their eventual (prophesied) reunion with a fabulous thirteenth skull, which will awaken all the skulls, bringing their knowledge to us – and that may be the beginning of an era of unprecedented peace and beauty, or it could be the end of us.

All of which may help explain all those skulls carved of various bright, dark, shiny or dull materials, peeking out at us from homes around the world. Who wouldn’t want a piece of the wisdom of the ages?