Skulls: From Life to Death (the meaning of skull and crossbones) 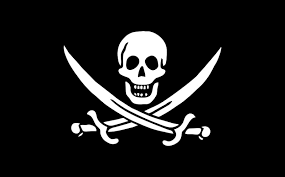 Argh, mateys! Would you like to hear a tale of death and regret, of dying on the high seas, and of death in a bottle where little kiddies are warned never to pry?

Well then, put up your saber and pull up a stool, and listen.

We all know it well, we do, the little skull and crossed bones that warn you away from dangerous potions. But before the alchemists took the use of it, the sign was used by pirates, and before that, by the Church as a symbol of the resurrection and life eternal. They trace its use to paintings made during the Middle Ages, a time when people died so often and in such numbers that Death seemed like a member of the family and got his fair share of artistic representation, for sure. Artists made pictures of the Crucifixion in which the cross of Christ’s death stood on top of a skull positioned over two crossed leg bones (representing a second “cross.”) The skull is supposed to be Adam’s, the first man, whose sin (with Eve) is the reason we all are “born sinful” and why Christ had to be martyred to “buy back” our entry into heaven and life eternal.

So for those folks, skulls meant death and undying life.

During the 1600’s, when ship designs and people’s curiosity and greed had advanced enough that long ocean voyages were undertaken, ship captains would draw little skulls in their logbooks next to the names of sailors who died at sea – an unfortunately high number, usually – and their bodies dumped overboard, gone but not forgotten thanks to the little skulls. Sailors began to associate the symbol, that heretofore had been used nearly as often to represent life and resurrection as death, exclusively with death.

By the 1700’s, the aforementioned improvements in sailing and a booming interest in international trade (especially in luxury items) meant that the loot carried by big ships was richer and more alluring, and piracy was a lucrative and growing business. One way for pirates to intimidate victims as well as spread stories about themselves was to fly flags that blared out to the world who and what they were.

At first, several different designs were used by known pirate captains, but eventually flags that included a skull and/or skeleton gained popularity. These flags didn’t always include the crossed bones, however; in fact, many early pirate flags made use of other symbols such as bleeding hearts, hourglasses, and spears or swords.

In 1720, a pirate named “Calico” Jack Rackham was captured by British authorities and brought to trial. The trial was the sensational story of the day, and everyone in England (at least) was talking about it. Calico Jack’s flag was a skull positioned over a pair of crossed swords, and this, known as the Jolly Roger, came to represent pirates in general. To the common folk, a skull and crossbones (or swords) would evermore represent something bad and probably deadly.

By the 1800s, as piracy waned and the seas were safe for most shipping and travel, a new danger arose: the use of new compounds and chemicals for “medicine.” Every corner pharmacy had its own version of elixirs and distillations, many of which could make you sick or sicker or even kill you, if misused. And most of the poorer classes were illiterate and could not read directions written on the bottles.

What was needed was a universal symbol to warn of danger… and the skull and crossbones was available.

And there you have it, mates, how one little sign got made with one meaning, short-cutted into half of that, stolen into service by ocean-going thieves, and slipped into public service by chemists.